Things are getting a little crazy at BMW's X department.

Buried somewhere in the 177-page BMW document that was obtained by supramkv.com, which previously outlined how the new Toyota Supra would be getting a pair of BMW engine options, is important information on other upcoming models from the Blue and White Roundel. Obviously news about the M2 Competition is well received, but more important to the bean counters interested in gaining further traction in the US are the two SUVs listed in the leak, the upcoming X2 and X7.

Thanks to the Supra fan site, we now know that the X2-coming to the US to steal away young BMW customers who need around town utility-will be derived from the X1 but given more aggressive styling reminiscent of the X2 Concept we saw at the 2016 Paris Auto Show. A front-drive platform will house the X2 sDrive 28i and an all-wheel drive xDrive version of that, both powered by a turbocharged 2.0-liter inline-four producing 228 horsepower. For richer customers who smirk at the small wannabe luxury connoisseurs in the X2, the X7 should be an apt choice. The document leak details a few exciting options for the range-topping SUV, which seems to have three separate engines to choose from.

First up is the xDrive 40i with a 3.0-liter turbocharged inline-six producing 335 horsepower, followed by an xDrive 50i with a 4.4-liter twin-turbo V8 pushing out 445 horsepower, and finally an xDrive 40d with a 3.0-liter inline-six diesel engine. The first two models have been confirmed but the diesel is still a maybe according to what internal sources have told Car and Driver. Also unconfirmed but a predictable option is a plug-in hybrid X7 to lessen the guilt of luxury leather lovers who care about the planet. When the X7 does eventually make landfall in the Red, White, and Blue, it'll go toe to toe with the emerging three-row luxury SUV class, which includes the Land Rover Range Rover and Mercedes-Benz GLS. Gotta love capitalism. 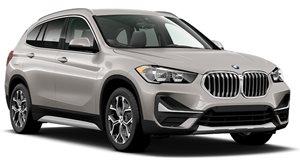