Looks like a new version of the BMW X2 is coming.

The BMW X2 was introduced as a small SUV with youthful styling designed to appeal to millennials. So why, then, is BMW testing a new X2 prototype?

A closer look at this prototype caught roaming the streets reveals it has a "hybrid test vehicle" sticker slapped on the side, which suggests BMW is cooking up a new plug-in hybrid version of the X2 that will be sold as one of ten new electrified models that will join its lineup by 2020. Remember, the X2 is based on the X1, which is sold as a plug-in hybrid in Europe and China, so it makes sense for BMW to also give the X2 the same treatment.

The X1 xDrive25e combines a 125-hp three-cylinder gasoline engine with 125 hp driving the front axle with a 95 hp electric motor on the rear axle. Combined, this setup produces 220 horsepower and enables all-wheel drive when both engines work together. Otherwise, it has front- or rear-wheel drive. This technology is also expected to be adapted for the X2. The X1 plug-in hybrid has an electric driving range of 35 miles, so the X2 version should deliver roughly the same range

The X2 PHEV prototype is almost completely devoid of camouflage, which isn't surprising considering we already know what the regular X2 looks like. However, on closer inspection, we can confirm the prototype has been fitted with fog light stickers to make it look like the current model. Fortunately, another white prototype was spotted completely undisguised, confirming that the X2's round fog lights are being replaced with LED stripes. It's unclear, however, if the redesigned fog lights will be a unique design feature of the plug-in hybrid or applied to all future X2 models. 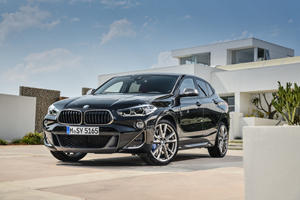