Someone in the UK turned an M140i hatchback into a modern-day Z3 M Coupe, and it's marvelous.

Every once in awhile, an automaker loses its mind and builds something so incredibly strange, quirky, and awesome, it's hard to believe it could exist. Remember the GT-R-powered Nissan Juke-R?

The BMW Z3 M Coupe "Clown Shoe" fits squarely within this category, with its ample cargo space, weird shooting-brake styling, and genuine BMW "M" bona fides. That car may have been discontinued after 2002, but it's since been reborn - in spirit - thanks to the efforts of BMW & Mini UK Group. The shop last weekend shared some pics of its unique custom build, which was born from a BMW M140i hatchback.

Not that it's all that easy to tell; the car has been completely transformed by the numerous BMW M2 parts that have been grafted on. Those bits came off a crashed M2, according to builder Dave Cambell, but the fitment is seamless, and they afford the car a wider, more aggressive stance, with significantly more track width.

Along with the significant styling overhaul, the BMW is also slated to get a performance boost before all is said and done, but not from an engine swap. With some fiddling, the factory B58 six-cylinder turbo is more than capable of producing enough power to suit Cambell's needs, he says. In stock form, the 3.0L mill puts out up to 335 horsepower in the M140i, but with its internals and closed-deck design, it's demonstrated a capacity for much more thrust.

The F21 BMW M140i is a car that, sadly, we never got to experience here in the US. But even abroad, Bimmer fans have had to come to terms with the end of an era as the brand new third-generation BMW 1-Series has switched to a transverse, FWD layout.

Granted, we do get the BMW Z4, and we have some of the best metal fabricators anywhere on the planet. If you wanted to make your own modern-day "clown shoe," about the only thing that might get in your way is money. 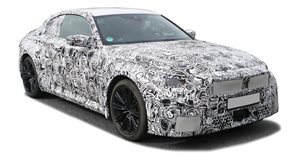