Have we found the most well-rounded supercar that money can buy?

Ever since Brian O'Conner handed Dominick Toretto the keys to a ten-second Toyota Supra in the first Fast and Furious movie, the obsessive pursuit of a stock ten-second car began. Years later and we've seen quite a few impressive stock submissions from various automakers using all sorts of powertrains, from turbocharged multimillion dollar brutes and fully electric passenger sedans to hellish supercharged muscle cars built for the drag strip and now this, the McLaren 720S.

One doesn't have to look far to find that the supercar is one of the the fastest and most advanced pieces of automobile available these days. It's great on the track, usable as a daily driver, and able to rip a Tesla Model S P100D's smile off its faceless front when put side by side on the drag strip.

And though it's not exactly optimized for drag racing-rear wheel-drive stopping it from reaching its maximum potential-YouTube's resident drag racing experts, the Drag Times channel, works its proven method of extracting the best possible launch out of the 720S. The results? Spectacular enough to impress Toretto with a quarter mile dealt with in 9:98 seconds at 141 mph. That's on a stock McLaren no less, with road tires and weather that's not optimal for the straights. If only it could be raced against the purple Lamborghini Huracan Performante shown in the video, then we could see if the bar for hypercardom needs to be raised in case today's supercars can hit it easily. 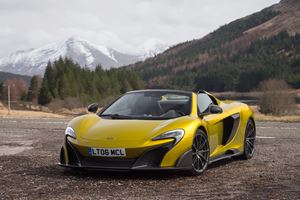