A wiser, grayer Bruce Wayne knows what luxury looks like.

The debate over who is the best on-screen Batman will probably rage on until the sun burns out, but for us it's between Christian Bale from the Dark Knight trilogy and Michael Keaton from the original movies. We might be showing our age here, but Keaton gets the nod by a batnose.

Now, if you haven't been paying attention, Robert Pattinson of Twilight fame will be taking over the Batman role in the next movie. But in the DC extended universe the Justice League's Flash will get his own movie, which will feature Keaton as the old caped crusader. The reason we care today is because of a tweet by writer, host and YouTuber Grace Randolph, who sent a picture from the set of the new movie. A gray-haired Keaton is seen along with a coupe version of the spectacular Mercedes-Maybach 6 concept from Pebble Beach 2016.

There are only two pics from the Twitter account, where Randolph seems to be involved with the movie, or she's just really close. One is of a very Bruce Wayne-looking version of Keaton and the other is of a navy-blue (or is it black? it must be black) Maybach Vision 6. Comically, the lengthy ride can barely fit into the frame of the photograph.

The 6 concept "featured" four compact permanent magnet synchronous electric motors for all-wheel drive with a flat battery sitting under the body. Similar to some of the new sheetmetal from Mercedes like the EQS electric sedan. The drive system has an output of 738 hp, which is good for a sub-4-second 0-60 mph time. It also had a claimed range of more than 200 miles.

Whether Pattinson will be praised for his role as the new Batman remains to be seen, but what's not in doubt is that his muscle car-inspired Batmobile looks awesome. It looks like it's based on a classic Dodge Charger or Plymouth Barracuda, but it sports a rear-mounted engine with a couple of massive turbochargers. Very cool.

But, if we were to pick something that we've seen either from the factory or concept, there aren't many better options than this Mercedes-Maybach 6. It has enough nose that it sort of resembles his earlier cars, but we're supposed to be in modern times, if not the future. So this is about as good as it could get; the AMG Project 1 would also be a good stand-in. As long as it's black. We've included our choice for Alfred's car below. 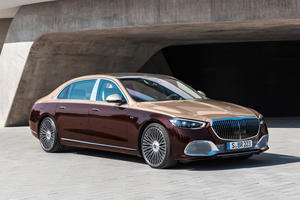 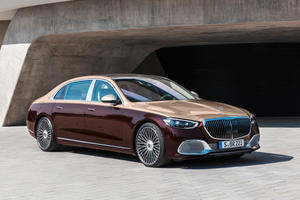