Buick's Next Model Should Be A Very Pretty Three-Row SUV

We may already know its name.

Buick's product lineup took a major hit when its parent company, General Motors, sold the Vauxhall and Opel brands to the French PSA Group. With this sale, Buick lost the Regal, the last sedan model available in its lineup. Buick will now operate as a crossover-only brand with models like the Encore, Encore GX, Envision, and Enclave. The American brand clearly needs to bolster its lineup with more products and according to patent filings and recent spy shots, a new model could be arriving soon.

The 2021 Buick Envision was just given a major facelift and if filings with the United States Patent and Trademark Office are to be believed, new exterior styling is not the only change coming to this model. The Envision is expected to spawn a three-row variant, which will likely be called the Envision GX.

Unlike the Encore and Encore GX, which despite sharing a common name are actually two completely different vehicles on separate platforms, the Envision GX is expected to be more mechanically similar to its two-row counterpart. The 2021 Envision will be the start of a second-generation for Buick's mid-size model, which will now ride on GM's C1XX platform rather than the older D2XX platform.

The EP2 platform also underpins the two-row Chevrolet Blazer and GMC Acadia as well as the three-row Chevrolet Traverse and Cadillac XT6. Since the platform can be offered in shorter and longer wheelbase guises, it is the perfect underpinning for a two-row Envision and three-row Envision GX.

The Envision GX will slot between the standard Envision and larger Enclave in Buick's lineup and cement a new naming scheme where 'GX' represents a larger version of an existing model. This new addition would make sense for buyers who prefer the nimble size of the Envision to the bulk of the Enclave but still need a third row.

Power for the Envision GX will likely come from the same 2.0-liter turbocharged four-cylinder from the standard Envision, which currently has an undisclosed output. In the outgoing Envision, this engine produced 252 horsepower and 295 lb-ft of torque mated to a nine-speed automatic transmission. 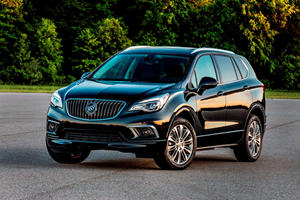