Getting a new name and a brand new look.

As part of Cadillac's plans to revitalize its lineup, the Cadillac SRX, which has been on sale since 2009, will be the first to receive a total overhaul. That includes adopting a new name, which is believed to be the Cadillac XT5. A prototype of the new crossover will be based on a scalable new platform codenamed C1XX, or Chi for short. As well as the new XT5, Chi will underpin a new Chevy crossover and the next-generation GMC Acadia, and in long wheelbase form will spawn the next-gen Buick Enclave, Chevy Traverse and a new Cadillac CUV.

The Cadillac XT5 will be powered by various turbo-four and six-cylinder offerings mated to GM's new nine-speed automatic. Despite the heavy camo, we can see the XT5 will wear a grille similar to that on the new ATS Coupe and get some large chrome exhaust pipes. The box appendage at the back is hiding some sloped rear glass, while several radar sensors are visible on the front and rear fascia, and the side mirrors have been moved down from the glass to the doors. Cadillac will shift production from Mexico to the Spring Hill, Tennessee, and start production of the CUV in late 2015, or possibly early 2016, arriving as a 2016 or 2017 model. 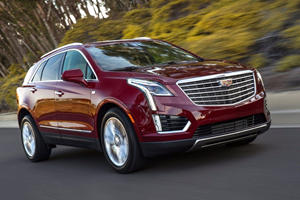