Cadillac CT4-V Won't Get The Feature It Probably Should

Fortunately, this doesn't apply to the upcoming Blackwing.

Earlier this week, Cadillac announced its most powerful V-badged sedans will bear the Blackwing name. The Cadillac CT4-V Blackwing and Cadillac CT5-V Blackwing nameplates have been rumored for several months, but now they're official. However, the automaker has not yet provided specific details regarding their respective powertrains, though we know for sure neither will come equipped with the Blackwing V8 from the now-discontinued CT6-V. Fortunately, both will offer a manual transmission. And yes, that's also official. But what about the non-Blackwing V models? Will they also offer manuals?

Cadillac Society has confirmed that the Cadillac CT4-V will be automatic-only but no precise reason was given. More specifically, it'll have a 10-speed automatic only. This information comes from "sources close to the product plans" but there's still no word yet regarding the manual's status in the CT5-V.

Obviously we're disappointed by Cadillac's decision because it reconfirms the manual is now reserved for niche vehicle models. The manual-less CT4-V is further proof mainstream buyers have little interest in rowing their own gears, at least according to market research. The CT4-V's power will come from a turbocharged 2.7-liter four-cylinder good for a very respectable 325 horsepower and 381 lb-ft of torque. Rear-wheel-drive is standard while AWD is an added option. Other V-Series extras will include a unique grille, 18-inch alloy wheels, a rear spoiler, and a quad exhaust.

Those who must have a manual will now be forced to pay up because there'll probably be a significant price difference between the CT4-V and CT-V Blackwing. Perhaps paying the price will be well worth it - and not only for the manual.

In all likelihood, the CT4-V Blackwing will come powered by the same twin-turbo 3.6-liter V6 found in the departed ATS-V, where it produced a splendid 464 hp and 445 lb-ft. Chances are the CT4-V Blackwing will offer similar BMW-hunting levels of power. Also like the ATS-V, there'll be beefier brakes and wider tires as well we more aggressive styling in line with what Cadillac typically does for its high-performance models.

The era of manual transmissions is quickly coming to an end. 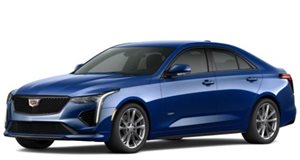