Has something changed GM's mind?

It's no secret the Cadillac CT6 lineup, including the 550-horsepower CT6-V, is finished. Along with the Cadillac XT6, Chevrolet Impala, and Buick LaCrosse, GM has decided to abandon the full-size sedan segment. Whether this will be forever is another matter. But for now, the General, like most automakers, is turning its full attention to what's profitable. That means SUVs, trucks, crossovers, and future technologies, specifically EVs and mobility solutions. As we previously learned, Cadillac CT6 production was originally slated to end last month at the Detroit-Hamtramck plant. Only it didn't.

Sources close to Cadillac claim CT6 production will continue until the middle of this month, a life extension of about two weeks. No specific reason was given, but it's likely Cadillac still has enough remaining orders to fulfill before the CT6 signs off for good.

Once the final sedan rolls off the line, the production plant will shut down for major retooling in preparation for electric vehicle production. The CT6's history is sadly a short one. Launched for 2016, the CT6 rode on GM's Omega RWD platform and was aimed directly at the BMW 7 Series, Audi A8, and Mercedes-Benz S-Class. Sales never lived up to expectations. It wasn't a bad vehicle, but simply the wrong vehicle for Cadillac at the time.

Powered by a range of engines, including a hybrid variant, the 4.2-liter twin-turbo Blackwing was the major standout. The CT6 was also given the honor of being the first Cadillac offered with the Super Cruise semi-autonomous highway driving system.

The good news is that both Super Cruise and other Cadillac sedans live on. The new Cadillac CT4 and Cadillac CT5 are both slated to receive Super Cruise, which continues to be upgraded. It's also worth mentioning Cadillac is developing an all-new RWD platform, dubbed VSS-R, which aims to consolidate all future sedans, big and small. It could even underpin the next-generation Chevrolet Camaro, assuming the pony car is not discontinued altogether.

In any case, the Cadillac CT6 is essentially living on borrowed time. 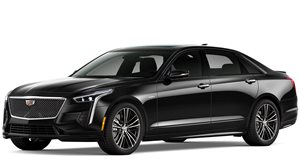