Turns out, people were scared of V cars.

Cadillac put the world on notice when it teased the reveal of two all-new V models to its performance portfolio. Then, when the CT4-V and CT5-V were revealed to the world, we all hesitated and let out a collective groan of confusion - wait, these are the V models? The CT4-V packs a 2.7-liter turbocharged four-cylinder engine with 320 horsepower and 369 lb-ft of torque, making it by far the least powerful V model ever produced. The CT5-V fairs slightly better with a 3.0-liter twin turbo V6 engine producing 355 hp and 400 lb-ft of torque.

Remember, Cadillac introduced the V brand back in 2004 with the 400 hp CTS-V and has since elevated the performance brand with CTS-V's third generation, which produces 640 hp. So 320 and 355 hp seem lackluster by comparison. In an interview with Automotive News, General Motors President Mark Reuss explained why these new cars have less power than their predecessors.

"There was, frankly, some people who were intimidated by the cars," Reuss said. "When we did a V series, they were hammers. There's some intimidation there." We can almost empathize with this argument - the old V models could be a handful to drive - but that's why Cadillac created V-Sport. The V-Sport version of the CTS produced a healthy 420 hp, which was not too intimidating like its 640 hp V Series sibling. Why weren't these new cars just called V-Sports? It would have saved Cadillac from receiving so much backlash.

Reuss also said people were intimidated by the price of V models, which were around $30,000 more than their base counterparts. The new CT4-V and CT5-V should only be about $6,000 to $7,000 more than their standard Sport trims but since we don't have any pricing available, we have no idea what the true price range will be.

Reuss said he isn't worried about diluting the V Series name because it has been "established" over the last 15 years. "Performance isn't going to go out of style and these sedans are really attacking a different play than what other people have. I still think there's a lot of room for sedans here."

Cadillac is also planning to reveal more hardcore versions of both cars, the names of which still remain unknown. The more powerful CT5-V should utilize Cadillac's new 4.2-liter twin-turbo V8 while the CT4-V will get a twin-turbo V6. All of this news just makes us wonder why Cadillac didn't just show us the more powerful cars in the first place.

First Drive
35
2020 Cadillac CT5-V First Drive: Vivacious And Vexing
The CT5-V is a solid offer, but it stops short of being special. 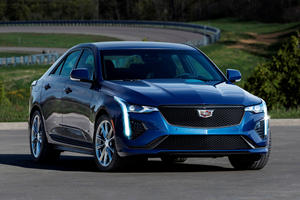