Ever since GM Design started sharing some of their once-secret concept design sketches on Instagram a few months ago, they've been stoking our curiosity. Already, sketches posted by the account have opened our eyes to what the GM Defense ISV Military Truck could have looked like, and shed some light on how a futuristic pure-electric Cadillac supercar might be styled.

Now, a new sketch upload from GM Design appears to depict what the brand new 2021 Cadillac Escalade might look like in an alternate universe, showing a big, imposing SUV with pillarless rear-hinged coach doors and a barn door-style swing-open rear hatch.

The drawings, penned back in 2016, were shared with the caption "great form vocabulary and incredible sketches done by exterior designer Rebecka Buller!" So, admittedly, we're making a pretty big leap in assuming that the all-new Cadillac Escalade is in fact what the artist intended to depict. But the sketches do look decidedly Escalade-esque, with a strong, square jaw, and an immense size.

Coach doors fell out of favor in the US auto market long ago due to their propensity for flinging open if they happened to become unlatched while the vehicle was in motion. Making matters worse, they tended to do that in the event of a crash, quite often ejecting passengers from the car in the process, hence their more unsavory nickname: "suicide doors".

Moreover, their design typically doesn't involve any sort of a structural pillar along the bodysides between the front and rear doors, making them especially susceptible to side impacts.

But the heart wants what it wants, and when Ford brought back a limited-run version of the Lincoln Continental featuring coach doors, customers snatched them up despite an MSRP north of $110,000. Part of the explanation for that is convenience; entering and exiting the second row of the vehicle is much easier with coach doors. But more importantly, they're just cool.

Will we ever see a production Cadillac SUV with rear-hinged coach doors? It's doubtful; crashworthiness standards are only getting more stringent as time goes on, and we don't see how GM could possibly make a vehicle with coach doors as safe as one without them. 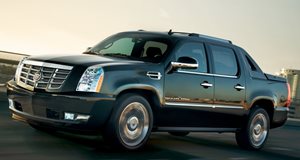