All of these have speed, rarity, and three rows of seats.

If you're in the market for a fast, luxurious, and unique seven-seater than can haul your family at ludicrous speeds on the highway, the brand-new 2021 BMW Alpina XB7 is an excellent choice. The XB7 enters a unique white space in the fast SUV market between options like the Mercedes-AMG GLS and more exotic models like the Bentley Bentayga, Lamborghini Urus, and Rolls-Royce Cullinan.

The XB7 goes on sale at $141,300. That's $40,000 more than the next-fastest X7 model, the M50i. That seems like a steep premium to pay, even for an Alpina badge, so we've come up with five used alternatives that all cost a fraction of the price. All of our used options pack three rows of seats, tremendous speed, and lots of character.

With a starting price of around $130,000, the 2021 Mercedes-AMG GLS 63 will be the most direct competitor to the XB7. But if you're willing to settle for the last-generation GLS 63, you can get a much better deal. The GLS was one of the last Mercedes models in the lineup to receive a refresh, meaning it was pretty outdated in a number of areas. It's powered by an older 5.5-liter twin-turbo V8 instead of the newer 4.0-liter unit but it still produced a healthy 577 horsepower, which is not far off the XB7's 612 hp.

It won't match the XB7's 4.0-second 0-60 mph time but 4.5 seconds isn't too shabby. This is even more impressive when you consider the price. A high-mileage used GLS 63 can be found starting around $40,000 with certified pre-owned examples starting around $70,000. Even with a warranty, that's half the price of a new XB7.

If you want to be even more unique than the Alpina and are willing to take on some reliability risk, consider the 2007 Mercedes-Benz R63. This future collector's item was sold in the US for only one model year and is easily the strangest vehicle to ever come from AMG. Based on the R-Class, which was a sort of pseudo-minivan, the R63 was powered by a 6.2-liter V8 producing 503 hp. Even with 100 hp and two turbochargers less than the Alpina, the still R63 manages to hit 60 mph in just 4.6 seconds.

Pricing for the R63 is tough to pinpoint since they are rarely available for sale. Some estimates say fewer than 30 were ever built but the number is almost certainly under 1,000. Either way, we recommend buying one and making it your daily driver. The lack of depreciation should almost cover the maintenance.

The Tesla Model X is easily the least "special" model on this list, considering you are bound to run into dozens of them out on the road. But if all you care about is raw speed, the Model X is in a league of its own. Tesla has changed the name of the highest-performing version from P90D to 100D to Performance but no matter which one you choose, the Model X will obliterate any of the other SUVs on this list in a drag race. Even the P90D, the oldest of the bunch, was rated at 532 hp and could hit 60 mph in around 3.2 seconds. With the P100D and Performance, this number dropped down to 2.8 and 2.6 seconds, respectively.

As the newest and least expensive model on the list (when new), you could walk into a dealership and buy a brand-new 2020 Dodge Durango SRT for less than half the price of the XB7 ($62,995). If you want Alpina-rivaling speed in a more blue-blooded American package, we recommend waiting for the rumored Durango Hellcat model with 707 hp.

But the regular Durango SRT is still an impressive performer courtesy of its 6.4-liter HEMI V8 producing 475 hp. With all-wheel-drive, the SRT takes just 4.4 seconds to hit 60 mph. The interior is, by far, the least luxurious on this list but most of the luxury features you'd expect are at least available. Used Durango SRT now starts in the low-$40,000 range.

It may seem hard to believe, but most buyers shopping for a three-row luxury crossover don't care about how fast it will go. With this in mind, the Volvo XC90 Hybrid is a perfect alternative to the Alpina. Since Volvo sells far fewer cars than BMW, the XC90 feels like a more unique choice even though it isn't a bespoke model. The T8 plug-in hybrid model is plenty quick with a 2.0-liter twin-charged four-cylinder and hybrid drivetrain combining to produce 400 hp. It can even travel around 18 miles on electric power only. 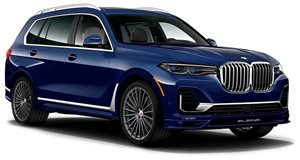 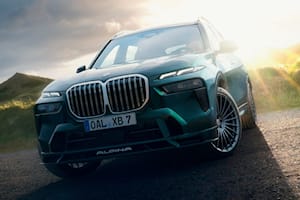 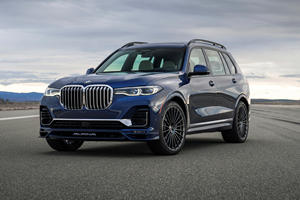