This is the original RS Avant, the one that started it all.

Back in the mid-1990s, Audi launched what still remains a legendary wagon across Europe. The RS2 Avant was actually Audi's first "RS" model, and was based on the old 80 wagon. It was also the first Audi to have the "Avant" name attached. And what made the RS2 all the more special was that it was a joint project between Audi and Porsche. Power came from a turbocharged 2.2-liter inline-five cylinder rated at 311 horsepower, and paired to a six-speed manual.

Because of the partnership with Porsche, the engine was further modified for even greater performance. 0-62 mph happened in just 4.8 seconds and had an electronically limited top speed of 162.8 mph. The interior was decked out with a Recaro seats, a three-spoke steering wheel, and console materials available in either carbon fiber or wood trim. The original plan was to build just 2,200 examples, but high demand increased that number to 2,891. Some RS2s were exported to Hong Kong, South Africa, Brazil, and New Zealand, but the majority stayed in mainland Europe. Because of the RS2 Avant's massive popularity, it spawned a successor that's still with us today, the RS4 Avant. 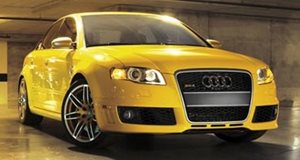