Cars Nobody Asked For: Honda Element

The Element was born of an effort to bring back a younger demographic it lost when the Civic went more mainstream. That effort was ill-conceived and implemented even worse.

The cars which automakers build for young people are some of the best examples of just how hilariously out of touch companies can be with their customer bases. The Honda Element was the vehicular equivalent of that guidance counselor you had in high school who believed himself to still be able to communicate with teenagers, but would actually misuse slang words in ways that would make you cringe and completely misjudge everyone's taste in music.

The Element came about as the result of a shift in Civic buyer demographics. Once the car of preference for college-age males, by 2003, the Civic was increasingly being bought by older and older customers and an increasing percentage of women. Sales were still fine, and the shift was the result of what Honda itself had done to the Civic, but there was clearly a belief at the Japanese automaker that the 22-year-old male market was slipping away from it. So Honda created the Element, basically a CR-V repurposed to be more accommodating to surfers and mountain bikers.

It was fairly inexpensive, had a good amount of interior space with doors that made it easily accessible and an interior that could be easily and quickly hosed down after you had gotten mud from your mountain bike all over it. The reaction this provoked from most 22-year-old males at the time was "what?" and it's easy to see why. After all, of all of the 22-year-old males in America, how many do you think have a real, genuine interest in surfing and mountain biking to the point where it would be the single most important factor in their choice of vehicle? Probably not many, at least not as a percentage of the whole.

Of course, Honda couldn't have sold a "get high and play Xbox" car, but that doesn't mean that the Element was the next best thing. The central failing of the Element was that Honda forgot that it had sold so many Civics to young men in the Eighties and Nineties in the first place, and that young men still drove small, cheap hatchbacks everywhere else in the world where they were available. Young American men hadn't stopped buying Civics simply because they had all suddenly become mountain bikers. This is not at all to say that the Element didn't have its uses, though. Dog owners loved them, as did people who had hauling needs, and those who lived in the city where a full-sized truck was impractical.

Sales for the first couple of years were actually better than predicted, but it should be noted that Honda completely failed to capture its actual target demographic. The car was rather an accidental hit. Because it had certain features which made it appealing to people other than young men who aspire to drive a box, the Element always sold much better than competitors like the Scion xB and the Nissan Cube. Not that sales were even that great for the last few years of production, they were just even worse for the others.

What people really didn't like about the Element, though, was that it was downright ugly. Honda apparently mistook functional utility for purposely unattractive styling. The looks were perhaps best summed up by a listener to NPR's Car Talk, who asked, "What element is it, Butt-uglium?" Honda had grossly misjudged the market by believing that all young men lived in the world depicted in commercials for energy drinks, and essentially relied on marketing people from other companies to tell it how to do its own marketing. Almost hard to see how they went wrong. 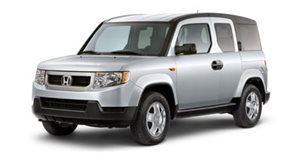 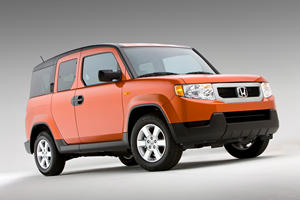