Cars Nobody Asked For: Hummer H3

Smaller than both the original and H2 Hummers, the H3 was based on the Chevy Colorado pickup, but ultimately deviated too far away from the Hummer formula.

We think we can all agree that the Hummer H1 is a very cool vehicle, and there was definitely a reason for the H2. People wanted the utility and all of the imposing looks of the H1 in a more practical road-going package. Some of the cool, however, was lost in the transition from H1 to H2, but when made a whole lot smaller for the H3... well, it just looks silly. That's not to say it wasn't a capable vehicle, because it actually was, but to say it was a real Hummer would be pushing it.

The history of the Hummer goes back to 1984, when AM General began producing the M998 High Mobility Multipurpose Wheeled Vehicle, which is often abbreviated as HMMWV, and pronounced "Humvee". AM General would begin selling a civilian version, initially known simply as Hummer, in 1992. GM would buy the rights to the Hummer line in 1999, at which point the civilian version of the HMMWV would become known as the H1. Following this, in 2003, GM would launch the H2. This was narrower than the H1, but longer, and still undeniably huge. This was the inevitable endpoint of the SUV trend which had started in the Nineties.

There was a certain amount of silliness which came with the H2, plastic parts masquerading as genuine military-grade off-roading equipment, but the sheer size and audacity of the H2 largely made up for this. The exact thing which the Hummer brand didn't need was a smaller and more practical vehicle, but that is exactly what they got in 2005 with the H3. This was basically a Chevy Colorado in a Hummer costume, and the rebadging is even more obvious than it was in turning a GM truck chassis into the H2. Like the Colorado, the H3 is actually a genuinely capable off-road machine, and this would be difficult to deny.

But how many of these does the average person ever actually see off-road outside of a commercial? In the end, the H2 and the H3 are still pretend military vehicles, no matter how capable they are, and it is therefore perception and not actual capabilities which are important. And even though the H2 could get away with playing dress-up, the H3 definitely could not. The H3 was launched with a 3.5-liter five-cylinder engine and full-time all-wheel drive. This was enlarged to 3.7 liters in 2007 and then a V8 option was made available in 2008. Five-cylinder models were painfully slow, as the platform and engine were really designed for a much lighter pickup body.

There was a pickup-bodied version of the H3 sold for a time, but you were basically always better off going for the V8. It had 9.7 inches of ground clearance, could ford 24 inches of water (the same as the H2) and had approach and departure angles that made it capable of scaling a 16-inch vertical wall. It was basically about the most capable mid-sized SUV you could buy, but genuine capability has been shown not to really be what most SUV buyers are looking for. It's possible that the H3 damaged the credibility of the Hummer brand, but it would also be pointless to speculate too much on that subject.

The decline and fall of the Hummer brand coincided with the economic meltdown, the end of the SUV trend, GM's own implosion and about another thousand factors as well. It would have been interesting to see what would have happened if the 2005 conditions had held for a bit longer, but we'll never know. One thing is for certain: when a vehicle's entire purpose is to be big, brash and imposing, the thing you do not do is make it smaller and more practical. That's not why people bought Hummers. 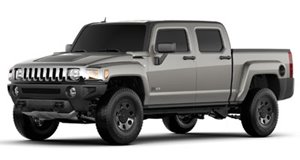