Despite a design that dates back to the early Nineties, the Nissan Tsuru is still a very popular car in Mexico and other South American countries.

The Nissan Tsuru is quite possibly the most important car you've never heard of. It began life as the 1991 B13 Nissan Sentra, but would become a major player in many parts of the world, as well as the flagship for a whole era of the automotive industry in Latin America. It's also one of those odd cases of a car which competed with itself, with Tsuru-badged B13 cars being sold right alongside Sentra-badged B14 (and beyond) cars in the same dealerships for years in Mexico.

The Nissan Sentra is in actuality the Nissan Sunny. The name Sentra is used in the US as well as Brazil, Chile and a number of other countries in the Americas. In Mexico it was known as the Tsuru, the Japanese word for crane, for the first three generations. But when Nissan de Mexico wanted to keep selling the B13 car as it was when it was first introduced in 1991, newer Sunny models adopted the name Sentra, while the old platform kept the Tsuru name. Mexico is actually ranked number eight by volume for car-producing countries, making it an essential market for automakers like Nissan.

But unlike Brazil, the other big name in Latin American automotive production (and number seven worldwide), Mexico gets very few cars made specifically for its market. So when it was decided to continue the B13 Tsuru, but with some Mexico-specific tweaks, the car started seriously picking up in popularity. The Tsuru would become the most popular car in Mexico starting in 1997 and this would continue all the way up until 2011, when it was dethroned by the Volkswagen Jetta. The popularity of the car is easy to understand; it's cheap because it's basic, and not because corners were cut.

Its 83 horsepower isn't impressive, but it weighs just 2,140lbs, and that's less than a Mazda MX-5. The car is exported from Mexico to a number of other markets, with the absolute cheapest version going to the Middle East. Cars don't even need catalytic converters there to make them legal for sale, and leaving this part off brings the price down. But you can get a new one in Mexico for about $9,000, and that's still quite cheap. It goes by the name V16 in some countries, for some reason, and is often sold alongside current Sentra models. It also sometimes competes with Sentras built in Brazil or the Philippines, but the Tsuru usually remains the cheapest model.

Few changes have been made over the vehicle's lifetime, but the clutch and a few other parts are now sourced from sister-company Renault. Not that his makes a huge difference. The Tsuru comes with such features as air conditioning and a CD player, although looking for much more in terms of luxury appointments would be expecting a lot. It doesn't have a lot of the safety equipment you might expect to find in more recently designed cars, but the B13 Sentra performed reasonably well in crash tests in its day, and is still probably safer than driving a cheap Chinese-built car. Think "they don't build em like they used to" and you're on the right track.

The Tsuru might not be the most popular car in Mexico anymore, but like the Hindustan Ambassador in India, it was number one for so long that it will remain the quintessential Mexican car for quite some time to come. In truth, it has probably become obsolete at this point. Even if Mexico isn't yet ready for all of its citizens to be driving Bentleys, a more modern basic car is called for today. But that doesn't mean there's no place for the Tsuru anymore, and it will probably stay in production for quite a few years, even if it reaches the point where all of them are made for export. 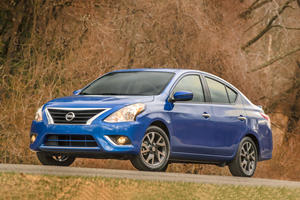