Chevrolet Launches Petition For The Official Vehicle Of Texas

Go to Texas and, of all the vehicles on the road, there's one in particular in abundance: the Chevrolet Suburban. Currently celebrating its 85th anniversary, Chevy's big three-row SUV continue to sell in significant numbers, especially in Texas. Everything is bigger in Texas. And now General Motors wants to make the Suburban synonymous with Texas. The automaker has just officially launched a petition on Change.org to make the Suburban the national vehicle of Texas. In fact, it's the "most Texan vehicle there is" because not only is the Suburban built at GM's Arlington Plant in Texas, it's also one of the most popular vehicles sold in the Lone Star State.

"Today, there are more than 200,000 Suburbans on the road in Texas and a Suburban is sold approximately every 90 minutes in the state," the petition states. "Additionally, Texas Chevrolet dealers account for five of the top 10 Chevrolet Suburban dealers in the U.S. In 2018, Texans bought more Suburbans than the smallest 25 states, combined!"

It's no surprise Texans have long loved the Suburban, an SUV that "can comfortably haul people and cargo anywhere, at any time." Built without interruption since 1935, the Chevy Suburban remains the longest running nameplate in automotive history. It fits right in there with what Texas Monthly called "the primeval Texas instinct to drive as far as possible." Understandably, the Suburban would not be what it is today if not for Texas. "From camping trips to Big Bend, high school football games in Odessa, college-football tailgates in Austin to the ranches, farms and oil fields in between, no one has shown more love to the Suburban than the great state of Texas."

Next month, Chevrolet will debut the all-new, next-generation Suburban as a 2021 model. And yes, it will once again be built in Arlington. If you're so inclined, you can head to Change.org to sign the petition which requires 500 signatures. 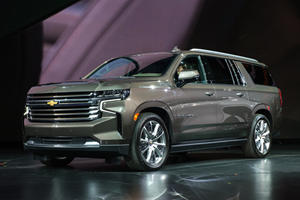 First Look
2021 Chevrolet Suburban First Look Review: Bigger And Better Than Ever
An all-American SUV at its finest.