Chevrolet Spark May Be Replaced By (Surprise!) A Tiny Crossover

Only a few days ago did we learn Chevrolet is likely to drop its Sonic small car in the US in favor of an expected focus on future EV and autonomous cars. We doubt few will miss it, even less so the Spark. Its sales dropped by 36 percent in the US last year alone. This year is not expected to be any better, likely worse. However, Chevrolet may not ditch the tiny car segment completely, according to a new Reuters report. Supposedly, the automaker is considering a new small crossover as a replacement.

It could rival the all-new (though slightly bigger) Ford EcoSport small crossover. If you recall, the EcoSport effectively takes the place of the soon to be dropped Fiesta in the US. Nothing is a done deal just yet because production for the new crossover is dependent on South Korean government financial support, as well as concessions from the local autoworkers union. Only a few days ago did angry South Korean GM factory workers storm the office of GM's South Korean CEO in a dispute over unpaid wages. Obviously that issue will need to be sorted, and, more importantly, a larger wage agreement/concessions between the union and GM South Korea to prevent the latter from filing for bankruptcy.

GM is already planning to shut down one of its South Korean plants, and others may follow. However, GM has proposed a $2.8 billion investment in the country, but only if the government agrees to help foot the bill. Obviously doing so would entail major long-term benefits, such as production of this crossover Spark replacement. The South Korean-built Spark was also exported to Europe as the Opel Karl. But since GM sold Opel to the PSA Group, GM South Korea has lost a big time customer. But given the ever growing crossover popularity in not only the US but Europe as well, a deal will likely be struck. If so, the new small crossover is expected to begin production in 2022. 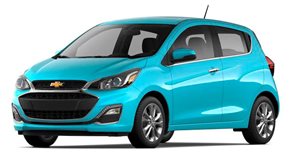