Not quite the perfect hot hatch he wanted it to be.

As appealing as it seems, the Honda Civic Type R is a polarizing car. Unlike the Ford Focus RS or Volkswagen Golf GTI, the Honda is the only one of the three with front-wheel drive, which means it's ever so slightly less of a riot in the corners. Though the RS also has polarizing looks, it's exterior is not overdone to the extent that the Civic Type R's is, and these two factors meant that no one knew what to expect out of the new version when Honda released it.

Not even Chris Harris knew just what he was getting into, and to remind himself of what the Type R stands for, he first gets behind the wheel of the previous generation Type R, the one that came out in 2001. Though it's down over 100 horsepower, the purity of Honda's character comes through clearly.

That's not quite what happens in the new Type R. Harris starts out by calling it a flawed genius. The engine is one of the outlying pieces of hardware given that it keeps torque consistent over the rev range and completely changes the nature of the car by making it so that a driver doesn't have to mash the pedal to extract linear acceleration. On the other hand, the Honda's drive mode controller lacks an "individual" mode that allows the driver to tailor the adjustable functions like throttle response, steering, and suspension to suit the drive. Is he sold? Yes, but there are some catches. 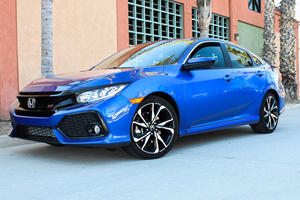