Some very expensive Shelby Cobras have crossed the auction block over the years, and at this year's Bonham's Goodwood Revival Sale a rare 1964 Shelby Cobra 289ci Competition Roadster joined their ranks, topping a rather special auction.

The list included a Jaguar XJR-11 Group C prototype and a number of desirable classic Aston Martins, Mercedes-Benzes and Bugattis. The final number came in at $1.76-million which made it the highest priced car at the event and made it the fourth most expensive Shelby car ever auctioned.

One of only 32 competition chassis developed and built in-house, the Shelby was built to full factory race specifications and it is still eligible for historic racing events today such as the Tour Auto, Le Mans Classic and the Goodwood revival itself. Chassis number CSX 2430 comes with a 4.7-liter small-block Ford V8; fitted with quad Webers and high compression cylinder heads it is reputed to make around 400 hp.

In classic car circles a successful racing history often adds value to a vehicle and the Cobra competed in numerous events right up until the 1980s, and was the last Cobra to be raced by Carroll Shelby, who raced it in the Texas Can-Am Challenge in 1984.

It went through a comprehensive restoration in 1985 by marque specialist Bill Murray (no relation) and was then also prepared for historic racing events which meant installing a five-point harness, upgraded fuel system and different exhaust. These modifications have since been removed but were sold along with the car so its new owner can take to the track if he or she feels the need for speed. We sure hope they do.

Rumor
Here Are The Names Of Rivian's Next Six Models

Offbeat
Protestors Plead With GM To Bring Back Saturn 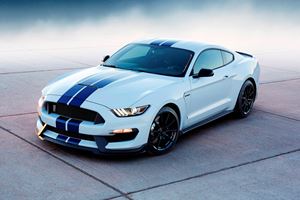