Coachbuilt Alfa Romeo Is One Of The Prettiest Cars Ever Made

Only seven exist in the world and one is now up for sale.

The 2020 Alfa Romeo 4C Spider is the Italian brand's only remaining sports car, and once the special edition 33 Stradale Tributo model is sold out, the 4C may not stick around much longer. This will leave Alfa with only the Giulia sedan and Stelvio SUV, plus some new incoming SUVs like the Tonale. Enthusiasts who wish to remember a golden age when Alfa Romeo built some of the most brilliant sports cars in the world now have an opportunity to buy one of the prettiest cars ever to wear the company's crest.

In 2013, Italian coachbuilder Touring Superleggera turned the Alfa Romeo 8C into the stunning Disco Volante. Three years later, the company celebrated its 90th anniversary by building a Disco Volante Spyder variant, of which only seven were produced. One of those seven cars is now up for grabs.

The car in question is currently listed for sale by Niki Hasler Ferrari, a dealership in Basel, Switzerland. As the interior plaque shows, this is number four of the seven cars, and it's being sold with a surprisingly high 16,000 kilometers (9,941 miles) on the odometer. Limited-production high-dollar creations like the Disco Volante Spyder often remain parked in collections accumulating dust, so it's nice to see that the previous owner actually drove this one around.

We hope the next owner puts some miles on it because the Ferrari-built 4.7-liter naturally aspirated V8 under the hood is considered a modern masterpiece. It sends 450 horsepower to the rear wheels through a six-speed semi-automatic transmission, sluggish by today's standards. But this car is less about speed and more focused on the sensations of driving.

We particularly love this example's bold British Racing Green paint, which differs from the typical red seen on many Italian sports cars. The interior, which is mostly borrowed from the 8C, features a matching green color. The selling dealership says the car just received new tires and brakes. It also comes with a six-piece matching luggage set and a front axle lift system to clear steep angles. This Disco Volante Spyder is ready for a European road trip.

Unfortunately, no asking price is listed. Meaning if you have to ask, you probably can't afford it. 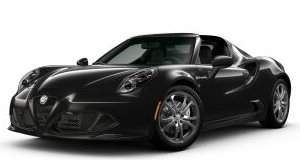