Will arrive as the Mercedes-AMG GLC63

The second-generation Mercedes GLK will be unveiled next year rebadged as the GLC. At some point down the line we'll see a three door coupe to tackle the BMW X4, and as these latest spy shots prove AMG is also working on adding some potency to the crossover. Lower and wider than the upcoming stock GLC (itself set to grow significantly to differentiate it from the GLA), the Mercedes-AMG GLC63 as it will be called, will come with bigger wheels housing bigger brakes, an aggressive body kit and, while not shown, we suspect a quad exhaust system.

Power will come from the new 4.0-liter twin-turbo V8 that debuted on the Mercedes-AMG GT, but with less power than the sports coupe puts down, somewhere in the region of 450 hp would be our guess. The inside will borrow much from the C-Class on which it's based, while for the first time, it will be engineered for right-hand drive markets. 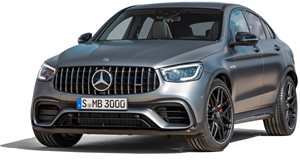