Confirmed: The Honda Urban EV Will Go On Sale In 2019

At least in Europe, but what about the US?

It was one of the hits of the Frankfurt Motor Show last month, so it's not too surprising that Honda has confirmed its Urban EV concept is on its way to production. Set to arrive in 2019, Autocar has learned that not only will it hit the streets in only two years' time, the exterior design, save for the wheels, will be largely unchanged. Expect more conservative final wheel styling. This all sounds great, but it appears that Autocar has only confirmed a European launch, as Honda didn't say anything regarding its US prospects.

That's unfortunate because the Urban EV has lots of character. We love its retro styling and its overall low and wide proportions are spot-on. It'll also be Honda's first EV for Europe. In the US, Honda already sells the Clarity hatchback. Built on an all-new platform strictly for all future Honda EVs, the Urban EV reminds us of the classic Mini, and given Honda's long history of engineering driver's cars, we see lots of potential here. A fun-to-drive supermini EV that looks like this is definitely needed in this world. Because it's slightly shorter than the Jazz/Fit, Honda doesn't believe it'll create internal competition. As for the concept's stylish interior, it'll likely be toned down somewhat for production.

The floating dashboard reminds us of the Tesla Model 3's layout, so it's technically possible for Honda to do something similar. In any case, come 2019 this sweet supermini EV will be speeding through European city streets. It'd also look great in the US. 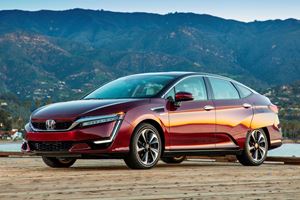