There are few Prowlers in the world like this one.

The Plymouth Prowler was one of the coolest-looking cars sold from 1997 until 2002. Its retro-styling had the spirit of 1930s-era hot rods and the safety and conveniences of a modern vehicle. While the Prowler wasn't a death trap like most of those overpowered homemade machines, it suffered from a lack of power.

The only engine it offered was a naturally aspirated 3.5-liter V6 with a measly 214 horsepower, though this was later upgraded to 253 hp. Combined with its four-speed automatic transmission and standard front-wheel-drive, the Prowler's power and performance never matched its killer looks. The Prowler even managed to survive an extra two model years when the Plymouth brand was dropped in 2001, reborn as the Chrysler Prowler. Not surprisingly, Chrysler had zero plans for a second-generation model.

But the good news is that over 11,000 Prowlers were built during its five-year lifetime, meaning there are plenty still out there available for all sorts of cool projects. This is one of them. Up for sale on Bring A Trailer is this LS7 7.0-liter V8-swapped 1999 Prowler, complete with a five-speed manual gearbox sourced from Porsche attached to a Porsche 650 transaxle, meaning it's also now rear-wheel-drive. The LS7, of course, came from GM, more specifically a C6 generation Chevrolet Corvette Z06. An exact output is not provided, but the LS7 in the Z06 made 505 hp. These extensive modifications were done by Legendary Motorcar Company based out of Ontario, Canada.

The custom build was done in 2006 and its current owner/seller acquired the vehicle in 2016. All told, it has just 3,800 miles on the clock. The build also saw additional work done, such as shaving the exterior handles, ditching the bumpers, and giving the interior an overhaul with Sateen leatherette upholstery.

A pair of Corvette bucket seats, a custom-fabricated center console, Porsche shifter assembly, and Stewart-Warner gauges were also installed. The driver will enjoy the Kenwood stereo and JL Audi amplifier. Stopping power comes courtesy of Baer brake rotors with Wildwood calipers. During the build itself, the car was stripped down and the chassis received a black powder-coating.

The exterior has been refinished in charcoal silver with an orange accent line and a black soft top. Riding on 18-inch and 20-inch front/rear Foose wheels, this Prowler comes with a complete build history, photos, and a clean Pennsylvania title. As of this writing, the highest bid reached $40,250 and the auction is scheduled to end tomorrow. 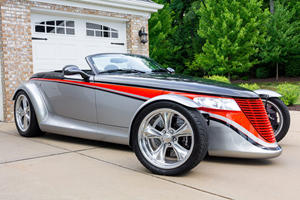 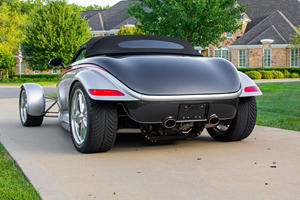 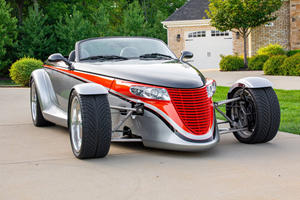 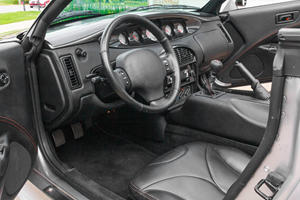 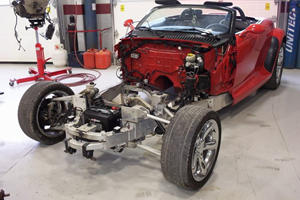