The S-Type was a clear-cut example of how retro styling, while trendy at first, looks seriously dated after just a few short years.

Now, the Jaguar S-Type was obviously discontinued a few years ago, but there will be a few discontinued cars in this series, and their poor resale value was probably a factor in the slow sales that led to their being discontinued. The S-Type was also just one more of those things that was wrong with Jaguar under Ford management, and a clue to the complacence which contributed to so many bad decisions being made in the auto industry at about this time. The S-Type was a whole new genre of car for Jaguar.

In the past it had made sports cars, GT cars, luxury cars and even a couple outright supercars. But the "executive car" was a slightly different genre, and it meant taking on the German heavy hitters head-on. To that end, it was given the kind of half-assed retro styling that the trend of the day often called for, just not with any of the cars in this segment. This approach was certainly divisive, but the car was not without its fan. Of course, not everyone who fell in love when they saw the long, sloping hood would stay in love when they saw the very Ford-like rear fascia. The car's Ford roots were obvious from the beginning.

It would have been a bigger disaster if it had been a simple rebadging, but the cabin littered with all manner of switches, gauges and door handles from the Ford parts bin (many of them from the Taurus) gave it away. The platform didn't even come from an especially cheap car, as it was shared by only the Lincoln LS and the 2002-05 Thunderbird. But in taking from the parts bin all of the pieces that the customer actually came into contact with, the impression was created that the car was of lower quality than it really was. It isn't hard to see why a car with the interior of a Taurus didn't do well up against the BMW 5 Series.

But the S-Type actually was fairly successful. It did not succeed in taking many sales away from the Germans, but it did a fine job of cannibalizing Lincoln sales and was probably one of the big reasons why the LS only lasted until 2006. It no doubt took sales from Cadillac too, as much of its lineup was lost at sea in those days as well. But cutting corners was never going to be the way to beat the Germans, and the S-Type ended up only staying in production for nine years. That's not to say there weren't things to like about the S-Type. First off, and of the highest importance, was that Ford's ownership put an end to the build quality issues which had plagued Jaguar for years.

V8-equipped models offered up good power, and the 400-horsepower supercharged V8-powered S-Type R served as a slightly cheaper alternative to Audi RS, BMW M and Mercedes AMG super sedans. The R-designated versions of the car hold their value a bit better, but this is to be expected. The car was never really up to the level of the German competition, and while this explains why its lifespan was so short, it isn't the main reason why it couldn't hold its resale value. The S-Type was ultimately let down by its styling. Retro is the sort of thing which only works if automakers commit to the premise.

Think how much better the current Beetle looks in comparison to last one, or better yet, compare the Dodge Challenger to the PT Cruiser. The S-Type wasn't a complete disaster like the Chevy SSR, but it nonetheless looked amazingly dated within just a few years of its debut. Such is the problem with trendy styling. 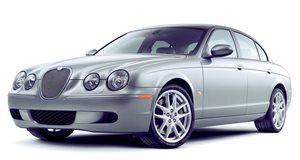