Did The New Audi R8 Just Get Leaked On Instagram?

Of course Audi is remaining silent on the matter.

It's set to officially debut in just a few weeks at Geneva, but the new Audi R8 may have just been (somewhat) leaked online. Instagram user "dreboog" uploaded the image you see here, claiming he received it from an Audi inside source. The image looks like it could be the real deal but, again, nothing can be fully confirmed just yet. However, the front end styling, most notably the grille, appears to match what we've seen in several previous spy shots.

It's hard to make out other styling details, but one thing caught our attention: the R8's signature side blades are absent. Again, this supposedly leaked image can't be confirmed and Audi hasn't commented, so your guess is as good as ours. A complete reveal of the new R8 is just around the corner, so we'll have our answer soon enough. 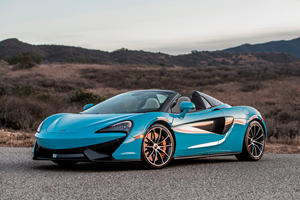