Buyers of 2021 Durango Hellcats were promised that the super SUV would be available for one year only. Now, they're livid.

If you ask almost anyone how they feel about Dodge after this week's developments, they'll probably respond in a very positive manner. The automaker has revealed the most powerful sub-$30k SUV on sale, announced the return of the Challenger Convertible, and shown off a new Charger Daytona SRT concept that truly changes what it means to be an EV.

This is great news to most, but there's one announcement that doesn't sit well with some fans of the brand, and it's the return of the Durango SRT Hellcat for the 2023 model year. Why is this bad news to some? Well, when the original launched for 2021, Dodge promised it would only be available for that model year, guaranteeing that it would become a classic.

To understand why this may be a bad thing, we have to go back in time. When the original Durango Hellcat launched, Dodge said only around 2,000 units would be produced, which later jumped to 3,000. That would still have made it one of the rarest (relatively) attainable cars on the market, but now that the fire-breathing SUV is returning, the car will be more common. And with Dodge beginning to electrify its performance products, one can't see a scenario where the 2023 supercharged Durango Hellcat doesn't sell like cocaine-infused hot cakes.

That means that buyers of the 2021 model are now not only part of a less exclusive club, but as older models, their cars will have subtle drawbacks in the infotainment system and other areas. Many 2021 buyers are very upset, and one named Stacy (full name withheld) is now set to pursue legal action.

Speaking with The Drive, the anonymous man says that he jumped at the chance to own the original: "We justified the cost because of the exclusivity, potential collectibility, and that this will be our only chance to have one custom made with all the options we wanted." All of those factors are now null after Dodge's announcement, and he's not taking it lying down.

"I had to do something if only out of principle," he fumes. "If you ask me what I personally want as an outcome... it would be simply that they stick to their word and do not build anymore." At the bare minimum, Dodge CEO Tim Kuniskis ought to offer an explanation. But without any public outcry, there probably won't be one, nor any compensation.

Stacy is liaising with an attorney who thinks there may be a case here and is reportedly in the process of determining possible damages to owners. A class-action lawsuit may follow as a result, as there is plenty of social media support for Stacy's efforts, but there are just as many people who feel he has no case. Some have posited that the pandemic may be used as an excuse. Others feel he should just stop complaining and use the car as intended.

While we agree that Stacy was misled at purchase (whether intentionally or not), we get just as frustrated by garage-kept classic cars that have never been driven as we are by seeing somebody's investment being whittled down through no fault of their own. What do you think? Should he push ahead with legal action, or should he make the most of his rare performance car? 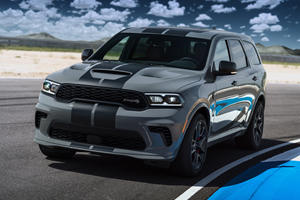