The redesigned Dodge Journey is set to arrive in showrooms for 2016 and it may even be built in the US instead of Mexico.

Despite being five years old with its age clearly showing, the Dodge Journey continues to be a part of the automaker's model lineup. While there are certainly more attractive competitors on the market today, the Journey is still a well-rounded crossover that sells good enough for Dodge to be working on an all-new version. Automotive News is reporting that the next-generation Journey is due to arrive for the 2016 model year and that it could share its platform with the new Jeep Cherokee and the 2015 Chrysler 200.

This is the same Alfa Romeo-derived front-wheel-drive platform that also underpins the Dodge Dart. But unlike the current Journey, which is made in Mexico, the new model may be built alongside its platform mates in one of two Michigan assembly plants or even the historic Jeep facility in Toledo, Ohio. By doing so, Chrysler believes it could save on operating costs due to easier access to local suppliers. For now, no exact details are known regarding the design or features of the next Journey, but that'll likely change as early prototypes will likely soon begin testing. 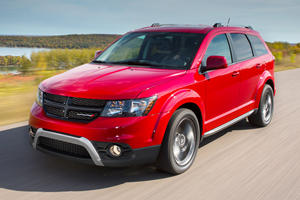