The original quota has increased significantly.

The Dodge Durango SRT Hellcat has impressed us in so many ways and has proven to be ridiculously quick, even with all-season tires fitted to it. With 710 horsepower and an asking price of just over $80,000, it's quite the performance bargain. Demand has clearly been greater than Dodge originally anticipated, as last month the automaker announced it would build more examples than the 2,000 it had originally planned to produce. This news was music to our ears, but at the time, we could not confirm how many more Durango Hellcats would be built. Thanks to Muscle Cars and Trucks, we now know that the production run will be increasing by at least 50 percent to over 3,000 units.

According to Dodge's head of sales Matt McAlear, the production target "is over 3,000 now", but in what we assume to be a defense mechanism against early adopters, he justified the decision to increase production by saying that "in the grand scheme of things, [the Dodge Durango SRT Hellcat] is [still] very limited". However, that does not mean that you should expect the production run to increase again.

Dodge CEO Timothy Kuniskis was earlier quoted as saying: "When we switch to '22 model year, there [are] new evaporative emission requirements that come in that the Hellcat engine does not meet in that platform. And with the change in platforms for the next-generation Jeep Grand Cherokee, it's a one-year cycle."

Even so, as McAlear said, the Durango SRT Hellcat is still one of the lowest-production offerings made with a Hellcat engine and will ultimately have a similar production run to that of the SRT Demon, which was also capped at a little over 3,000 examples. As Kuniskis said, regulations around emissions are getting ever more stringent, so if you want a rip-roaring supercharged V8 in your family SUV, this may well be one of the last opportunities to get your hands on one. If you miss out anyway, fear not - Dodge will "reinvent the muscle car" when electrification finally kills the V8. 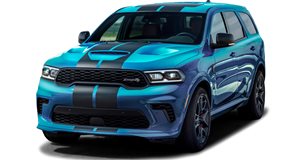