American muscle against a Japanese sports car in this week's edition of Drag Race Tuesdays.

This week's Drag Race Tuesdays features a matchup between a classic American muscle car and a Japanese sports car. Filmed on the dragstrip at Dunn-Benson, North Carolina on Test and Tune Night, the quarter-mile race was a close one. The Firebird Trans Am began production in 1969 and went strong until Pontiac pulled the plug on the classic muscle car in 2002.

Pontiac abruptly followed suit less than a decade later, finishing production in 2009 and closing up shop in 2010. The Trans Am was the powerful trim offered by the American company for their Firebird, offering better handling, suspension and power than base models. The 350Z Roadster was Nissan's two-door sports car. It was produced between 2004-2009 and was the fifth generation Z-line. All the 350Z's ran on V6s, with power output varying over the years between 287hp to 306hp. The matchup is a close one, so check out the video on the next page to see who takes the quarter-mile strip the fastest.

Who ya got: a classic American muscle car vs. Japanese Z-car heritage? 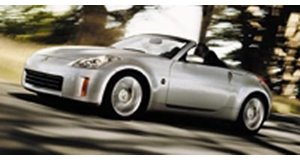