What did they have to hide?

Fender benders happen all the time, but this seemingly innocent traffic accident involving a Lamborghini Huracan Spyder and a Ford Super Duty is extremely bizarre. ABC 10 reports that the Lamborghini slammed into the back of the pickup waiting at a red light at 7.30 am in Miami, pushing it into the middle of the intersection. The driver of the Super Duty was a firefighter on his way to work. Normally, most people in this situation would check if anyone is injured and exchange insurance details.

But as surveillance footage that captured the entire incident shows, the driver and passenger of the Lamborghini fled the scene of the accident and hopped into a friend's Mercedes S-Class that pulled up behind.

Why anyone would leave a $300,000 supercar abandoned in the street is beyond us, but they must have had something to hide. From the photos, the Huracan was severely damaged and became wedged under the pickup's bumper, crumpling the hood and damaging the carbon fiber. The pickup, on the other hand, barely has a scratch on it.

"That was really crazy. A Lamborghini is like a $300,000 car how can you just leave it there," a worker at a nearby shop said. The firefighter, who was unhurt in the crash, was comparatively unfazed, however.

He believes the Lamborghini could have been a rental car given how quickly the driver abandoned it after the accident. Miami police are still investigating the hit and run accident and trying to track down the two men who fled the scene. 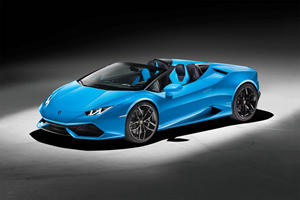 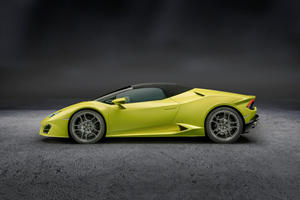