Electric BMW i4 Will Arrive With Three Different Power Variants

And one of them has an M badge.

The upcoming 2021 BMW i4 is the German automaker's answer to the Tesla Model S. After seeing endless spy shots and leaks, there isn't much left to learn about the i4 but thanks to BMW Blog we now know that there will be at least three different variants available.

Based on the same platform as the upcoming 4 Series Gran Coupe, the base i4 will be dubbed the BMW i435. This model will arrive with a rear-wheel-drive setup and around 280 horsepower. Pricing still remains a mystery, but rumors estimate a starting price in the mid-$40,000 range.

Above the base i435 version, the i440 will still offer RWD but with a significant output increase to 330 hp. This version of the i4 may also include a boost function, which will temporarily provide even more power. Again, pricing is still an unknown here, but we'd estimate at least $50,000. BMW has already confirmed that the i4 will have an M badge, though that doesn't mean it will spawn a true M variant.

At the top of the i4 tree will be the i4 M50. Like other BMW products with two numbers after the letter M, we assume that the i4 M50 will be an M Sport model, rather than a fully-fledged M car. But we still suspect that it will be very quick.

Unlike the other i4 variants, both of which will send power from a single motor to the rear wheels, the M50 will boast two electric motors sending their output to an xDrive all-wheel-drive system. This model's power is expected to lie in the 450 to 460 hp range with M performance improvements like bigger brakes, larger wheels, and other visual changes. 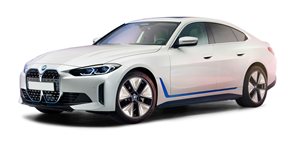