Some Quattroporte models have been better than others, but the current one is one of the best.

Maserati has built a number of different four-door cars over the years, and not all of them have been brilliant. However, those which have actually bore the name Quattroporte have sometimes been quite good indeed. This isn't a universal rule, but it is mostly true, and most important of all, the current car is one of those good ones. In fact, the current car is not just brilliant to drive and practical at the same time, but it is also somehow surprisingly reasonably priced.

The first Quattroporte was conceived and built in the early Sixties, a time when Maserati was at one of its several high points. The car was basically a GT which had been stretched and given two extra doors and more rear legroom. Simple as this formula was, it made for a really spectacular car. There were a couple of other four-door supercars at the time, the Facel Vega and Lagonda Rapide (yep, same idea as the current A-M Rapide) but the Quattroporte was faster and really much more purpose-built to be a supercar. In this sense, this was the genesis of the four-door supercar.

Such was Maserati's clout at the time that it could do things like invent its own genre of cars. This first Quattroporte unfortunately only lasted until 1969. The new Quattroporte II would debut in 1974, but this was an entirely different vehicle. While the original had been rear-wheel-drive and powered by a V8, this was front-wheel-drive and powered by a 3.0-liter V6. The car was also built on an extended Citroen platform, which immediately made it much less special. The oil crisis would take hold at about this time, Citroen and Maserati's relationship would deteriorate and the Quattroporte II would ultimately be sold only in small numbers in a handful of countries.

Alejandro de Tomaso would take over Maserati in 1977, and although this period would be a bit hit-or-miss, the 1979 Quattroporte III was a hit. The idea was to make an Italian car to compete with the Mercedes-Benz 450SEL 6.9, the reigning king-hell super sedan of its day. This was once again a RWD sedan powered by a choice of V8 engines which ranged in output from 252 horsepower to 296 horsepower. Starting in 1985, Maserati would offer the Royale, a super luxurious version of the Quattroporte hand built to customer specifications.

These are obviously some of the most valuable collector models built by Maserati during this period in the company's history, and one was even bought by the Italian president. The Ouattroporte III was a success, and production would continue until 1990. A new Quattroporte would debut in 1994. Somewhat less of a flagship than the III, the Quattroporte IV still got a number of things right. The car was basically a facelifted and four-door Biturbo, which doesn't say a lot for it, but it had a reasonable amount of power and was at least RWD.

Styling was by Marcello Gandini, the man responsible for the Lamborghini Miura, Countach, Lancia Stratos and Bugatti EB110, among others. So it was an attractive enough car, for a sedan built in 1994. Then Ferrari would take over Maserati in 1997 and the 1998 Quattroporte would have about 50 percent new parts. It was still considered a Quattroporte IV after this point, and would look more or less the same, but the official nameplate would become Quattroporte Evoluzione. Everything changed with the 2004 Quattroporte V. At this point it became a mainstream luxury car, with annual sales more than double that of the entire 11-year production run of the Quattroporte III.

With loads of interior space, a Ferrari-sourced V8 and gorgeous Pininfarina styling, it's sometimes difficult to remember why anyone ever buys German cars. It isn't really a four-door supercar like the original, and neither is it a sober and discreet box for boring executives. It's something else, and that's what makes it special. 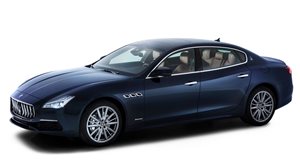