Before BMW drops the top, rendering artists have taken a virtual hacksaw to the new 8

BMW just took the wraps, at long last, off the new 8 Series. But like so many new models, its arrival represents as much a beginning as an end. There'll be more versions to follow the M850i coupe, and not the least of them, we expect, will be the convertible. The question is, what will the drop-top 8 Series look like? Leave it to the rendering artists showcasing their skills to give us a heads up on the drophead. In this case, two of our favorites have done just that, and we're glad to bring you the latest work from X-Tomi and Nikita Aksyonov.

Slated to supersede the 6 Series, the new G14-generation 8 Series represents the rebirth of one of BMW's most iconic models – last produced in 1999. From what we've seen so far, the new model looks just as slick, although this time around the design is a little more... shall we say, "involved." The debut version just unveiled is the M850i xDrive, which packs a 4.4-liter twin-turbo V8 sending 523 horsepower and 553 lb-ft of torque to all four wheels through an eight-speed automatic transmission. The net result is a 0-62 time quoted at 3.7 seconds and an electronically limited top speed of 155 mph.

There'll be a diesel 840d offered as well, also with xDrive four-wheel traction. Its 3.0-liter turbodiesel straight-six kicks out 315 hp and 502 lb-ft of torque for a 4.9-second 0-62 time and that same restricted top end. You can bet there'll be more powertrains offered as well, extending up to a full-on M8. And in addition to the coupe and convertible body-styles, we're expecting a four-door Gran Coupe to factor into the lineup as well ­– and Aksyonov has worked up a rendering of how that one will look, too. Both will chart new territory for the model, as the previous 8-Series was offered only as a two-door coupe. 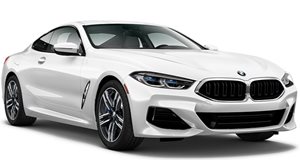