These renderings are probably spot-on.

We know Ford's Mustang-inspired all-electric crossover will debut later this month at the 2019 Los Angeles Auto Show. We also know it's just the start of the Blue Oval's big electric push. What we don't know is what it will look like. We'll have to wait for the big reveal on November 17 for that, but until then the folks at MachEForum have provided this set of detailed renderings based on spy shots and other insider details.

What you see here in multiple colors (we're digging the yellow and green) is nearly the real deal, save for some minor styling details. We're not sure about the Mustang emblem in place of the traditional Ford logo but we'll find out what the carmaker has planned soon enough.

As you can see, the Mach E – a name that's not official – borrows its styling heavily from the current-generation Mustang. That's not at all a bad thing but it also means Ford designers did not bring much of anything new to the table. Perhaps it was best to play it safe, design-wise, for a vehicle designed and engineered from the ground up as an EV. No more shoehorning electric motors and batteries into a Ford Focus Electric. Such a significant engineering and powertrain transition may require some design familiarity.

These detailed renderings show a sporty crossover hatchback with a variation of the Mustang's front and rear end. Also notice the similar wheel arches and rear shoulder. No rear exhaust is required, for an obvious reason.

The rendering artists also say they "had some fun" with these images by adding some carbon fiber wheels courtesy of Ford Performance. As of now, Ford Performance won't offer its own version, but it's definitely not something to rule out. Just give it time.

In general, we like what we're seeing here. The Mach E doesn't directly steal the Mustang's design, but rather borrows the right elements and applies them well. With a reported 300-mile or so driving range, the 2021 Ford Mach E could be the also upcoming Tesla Model Y's most serious threat so far. 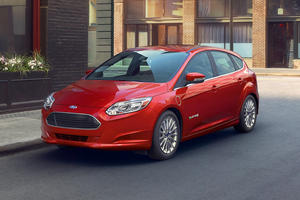