The GT 73e is no ordinary plug-in hybrid.

The Mercedes-AMG GT Four-Door lineup will soon expand with an even more powerful variant that rivals Porsche and BMW are already dreading. The Mercedes-AMG GT 73e, teased earlier this month alongside an AMG One hypercar prototype and the new AMG Petronas F1 car, does not yet have an official reveal date but several details are already known.

With its 4.0-liter twin-turbo V8 producing around 612 horsepower alone, the four-door cruise missile will be further equipped with a plug-in hybrid setup that includes a 201-hp and 268 lb-ft electric motor for a combined output of at least 805 hp and 740 lb-ft. To compare, the AMG GT 63 S, the current range-topper, has 630 hp on hand.

Autocar has learned more details about the GT 73e's new plug-in hybrid system that's expected to serve as the basis for future performance models, including the also upcoming C63e. The system's new electric motor, which supposedly shares key components with the EQC's asynchronous electric motor, is integrated into the rear axle allowing for direct drive to the rear wheels in either all-electric or hybrid mode, the latter with torque vectoring.

That motor is larger than the one used in the existing PHEV system found in other models, and that bigger size means more power (and weight). Its torque, for example, is not limited because of gearbox restrictions. An added benefit because of its size and weight is better front-to-rear weight distribution. Improved energy recuperation during braking is fed directly back into the battery.

So yes, the GT 73e is a plug-in hybrid that'll have darn good efficiency considering its total output, but those still on the fence regarding electrification must know this powertrain offers "previously unattainable levels of power and torque" for a street-legal AMG sedan.

Expect a 0-62 mph time of less than 3.0 seconds, beating the GT63's 3.2-second time. Running on pure electric power alone will be possible for up to around 62-70 miles. Owners will additionally enjoy DC charging compatibility.

In many ways, the AMG GT 73e will be the spiritual successor to the famed and ultra-limited AMG 300CE Hammer that debuted way back in 1987. It was an absolute beast for its time, packing a 6.0-liter V8 with 385 hp. The AMG GT 73e isn't expected to be built in limited numbers but it definitely won't be something you'll see every day. Expect a full reveal later this year. 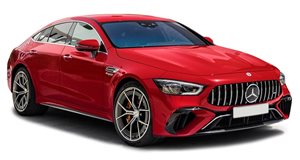