And there's no spare key, either.

For many, owning a Ferrari is the stuff of dreams. Whether it's a brand new Roma or something more classic, being handed the keys to your Prancing Horse must surely be one of life's greatest pleasures. But, as with anything in life, there are downsides. One unlucky Ferrari driver in South Africa is now facing a hefty bill after she lost the only key to her FF in an alleged bar fight, reports the country's Times Live.

The fight reportedly took place in a restaurant and spilled over into the parking lot, where the key was later lost. Rather embarrassingly, the quirky Ferrari FF had to be towed away to a safe place. The owner of the vehicle has put up posters pleading for the safe return of the pricey key.

But some things just don't add up to us. Firstly, the owner's friend stated the vehicle was not sold with a spare key, alleging that Ferrari charges extra for a secondary key. "The problem is that when you order the car, the spare key is an extra R39,000 (around $2,400). Not a lot of people who drive these vehicles have a spare key [and] these vehicles are usually parked in a garage."

The Italian automaker has since dispelled this notion, stating that all its cars do, in fact, receive a spare key as standard.

Even if that were true, we find it hard to believe the average Ferrari owner wouldn't order a spare key. After all, what's a few extra thousand dollars on a car with a price tag of $300,000? Then again, it's entirely possible that the vehicle was purchased secondhand. But again, we have to wonder: why would anyone fork over this much money for a car with no spare key?

We're not sure what the full story is, but it's certainly suspicious. Hopefully, the key is returned, or else a hefty insurance excess is likely, but even if it does come to a large bill, these are the prices you're expected to pay as an exotic car driver. Perhaps next time the FF's owner decides to go out, a Tesla would be a much better choice. The automaker no longer offers a key fob as standard, instead providing owners with the handy key card. Of course, most owners just prefer to unlock their Teslas via their smartphones. 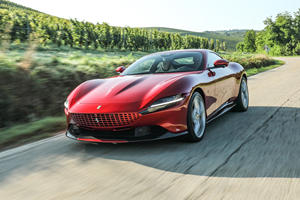