Final Production 2012 Chevrolet Cobalt Introduced, but Not for America

Having debuted in the summer, the Chevy Cobalt is being readied for production.

The Cobalt's nameplate is set to live on, despite it dying a death in the U.S. where it has been replaced with much success by the Cruze sedan. Following the concept's debut at the Buenos Aires Motor Show in the summer, General Motors have now introduced the final production 2012 Cobalt, which is to go on sale in 40 countries spanning Europe, the Middle East, Africa and South America. North America is not so lucky or is being spared, depending on your perspective.

The first country to receive the new Chevy Cobalt is Brazil, one of four locations around the world where it will be produced, and its GM's Brazilian arm that fully engineered and designed the new compact that sits somewhere between the Sonic/Aveo and Cruze sedan in terms of its external dimensions. Not to everyone's taste perhaps, but it's certainly roomy with a generous 563 liters of trunk space and according to Chevrolet the Cobalt "has room for five adults who are accommodated comfortably." The interior features a motorcycle-themed instrument cluster and bears similarities with the Sonic/Aveo. Prices start from $23,000 in Brazil, with two engine options.

A flex-fuel 1.4-liter producing 102hp when run on ethanol and 97hp on gasoline; and a 1.8-liter engine linked to a 6-speed automatic transmission. In other countries a wide range of 1.3- to 1.8-liter 4-cylinder engines will be offered. 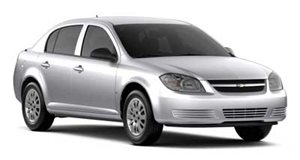