The camouflage will be coming off at the 2019 LA Auto Show in November.

Last week, our spies caught the new BMW 2 Series Gran Coupe undergoing testing wrapped in colorful camouflage. Slapped on the doors was a website address directing you to the teaser site. As it enters final testing in Munich, Germany, BMW has released new photos and details about its Mercedes CLA rival, which is seen wearing the same camo as our spy shots.

BMW has also confirmed the 2 Series Gran Coupe will be based on the same front-wheel-drive platform as the recently unveiled new BMW 1 Series. The range-topping M235i xDrive model will be sold with all-wheel drive and use the same turbocharged four-cylinder engine as the M135i, producing 306 horsepower.

This engine enables the lighter M135i hot hatch to hit 0-62 mph in 4.8 seconds. As standard, the M235i will also come with BMW's newly developed mechanical Torsen limited-slip differential, which creates a locking effect between the front wheels for a sportier feel.

Additionally, the 2 Series Gran Coupe will be fitted with the i3's ARB (near-actuator wheel slip limitation) technology to improve stability. ARB uses a slip controller positioned directly in the engine control unit rather than in the control unit for the DSC (Dynamic Stability Control) system. BMW explains that eliminating long signal paths allows information to be relayed three times quicker, while the driver perceives wheel slip being brought under control up to ten times faster.

BMW has had a lot of success with the Gran Coupe versions of its 4 Series and 6 Series, so we're not surprised the 2 Series is getting the four-door coupe treatment. More updates will be shared on BMW's 2 Series Gran Coupe website in the run-up to its world premiere at the 2019 LA Auto Show in November. After that, the BMW's Mercedes CLA fighter will go on sale in spring 2020.

Industry News
These Are The Cars Owners Keep The Longest 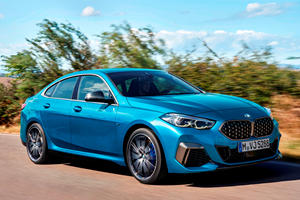