First-Ever L88 Corvette With Racing Pedigree Is Up For Sale

Dig out a Tommy Bahama shirt and light a stogie for this gem of a Corvette.

As 2020 creeps to a welcome end, a new round of major classic car auctions is rearing its head. One of the first ones will be Mecum's event-based in Kissimmee, Florida, and running alongside it is the Mecum Gallery Exposition where this stunning 1967 Corvette roadster will cross the block. It was the first Corvette to be built with the legendary L88 RPO package, and then it was raced by the most successful Corvette driver yet, Tony DeLorenzo Jr. However, if it's convoluted minor details that get your blood pumping, it's also the only convertible L88 Corvette produced in 1967 with Tuxedo Black paint from the factory.

Tony DeLorenzo Jr.'s father was a GM Public Relations Executive, and his first Chevrolet Corvette was a 1964 model that was modified by Zora Arkus-Duntov's Corvette Engineering group. Following a successful start to his racing career in a more affordable 1965 Chevrolet Corvair, he was backed by Hanley Dawson Chevrolet in Detroit. The dealership took delivery of the first L88 packaged Corvette for him to campaign in SCCA A Production. The highlight is the 427 Mark IV endurance racing engine that the Corvette Engineering Group heavily fortified and tuned to deliver 430 horsepower from the factory, or up to 560 hp and 470 lb-ft of torque afterward.

After two years in DeLorenzo's hands, he sold the Corvette to Doug Hooper, who then passed it onto a race team in Canada in the 1970s. By the time the car won the 1982 Canadian Road Race Championship, its bodywork had been modified in the same way the majority of heavily Corvettes had been in that period. Eventually, a collector bought the car and had it restored by the Naber Brothers in Houston, Texas, to Concours-quality standards. It's passed through a few collectors since and was reunited with DeLorenzo one last time at the Monterey Historic Automobile Races.

According to Mecum, it will be available to inspect and purchase at the Kissimmee event from January 7-16, 2021. That suggests it has a solid price tag but isn't noted on Mecum's website. 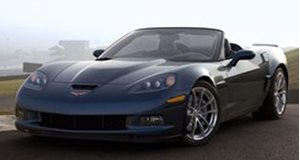