Flooded Mazda RX-7 Was Saved By A Complete Stranger

This guy is a true hero.

We've seen before how much damage flooding can do to a car. So when car enthusiast Austin Owens saw photos posted on social media showing a stranger's Mazda RX-7 submerged in a flooded garage during a tropical storm, he immediately took action, despite not knowing the owner.

The Japanese sports car was parked at the Golden Nugget Casino in Biloxi, which has been ravaged by the Tropical Storm Cristobal. After seeing photos of the Mazda RX-7 flooded up to the rocker panels, Owens couldn't sit and watch his dream car perish, so he and his friend took off in a Ford Bronco on a search and rescue mission to try and save the rare RX-7 from drowning.

"The first thing I did was hopped into the car and went to Home Depot and bought eight cinder blocks," Owens told Jalopnik.

During the journey, the pair had to avoid road closures and drive through streets with water "probably about three or four foot in some areas."

When they arrived, they found the RX-7 sitting on some bricks and wood planks. The car's owner had also arrived at the garage along with two other people to rescue a Ferrari 360 parked alongside the RX-7 from the rising water. To make matters worse, this was a custom Mazda RX-7. The owner had recently spent thousands of dollars on the paint and bodywork and only had liability insurance.

Since the RX-7 had a leak in the trunk area, the owner parked it in the garage thinking this would offer enough protection during the storm. The bricks and wood planks could not prevent floodwater from entering the RX-7, so Owens and his friend placed two cinder blocks under the front wheels to prop it up and protect it from the rising water. If Owens hadn't arrived, the Mazda RX-7 probably would have been a total loss.

Why did Owens go to so much trouble to save a complete stranger's car, you might be wondering? "It's a beautiful rare car, and there's not too many of them around anymore. It's one of my dream cars," Owens said. "There's no way I can leave that car sitting there like that. It was definitely worth it. It's a rare car...I would hope somebody would do the same for me if I was in the situation with a car of that stature. I didn't have it in my heart to leave it there."

For his troubles, Owens admitted the Bronco's transmission was damaged from the flood water, forcing them to drive in second gear on the way home. Given everything that's going on in the world right now, we need more selfless acts of human kindness like this. 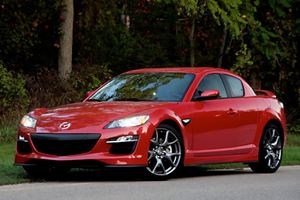