With the new Bronco and Bronco Sport, is the Edge even necessary anymore?

Things are not looking great for the 2020 Ford Edge. The two-row mid-size Edge currently slots between the compact Escape and three-row Explorer in Ford's lineup but with the upcoming additions of the Bronco, Bronco Sport, and Mustang Mach-E, there may no longer be a need for it. According to AutoForecast Solutions, Ford will soon announce a cancelation for the next-generation CDX777 Edge, which would have been built at Oakville, Ontario plant in Canada.

Ford plans to shift Nautilus production to China in 2023 and these same reports claim that the next-generation Edge could be moved there as well. This means the Edge could possibly live on in other markets but it is unclear if a Chinese-built Edge would continue to be sold stateside. Ford did manage to sell 138,515 copies of the Edge in 2019, which was up from 134,122 in 2018, but poor sales in Europe could be partially responsible for the Edge's demise.

If the Edge does go away, it would leave the Explorer as the only ST-branded model left in the US, since the Fiesta, Focus, and upcoming Puma ST are not sold here. The Edge ST may not be our favorite ST model of all time but its discontinuation could spell doom for the ST brand as a whole. Ford also offers a lesser ST-Line version of the Edge and a few other vehicles but they do not fill the hole left by the Fiesta ST and Focus ST. 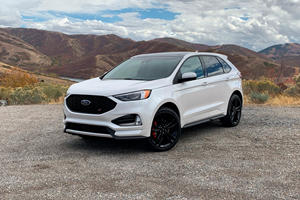 First Drive
21
2019 Ford Edge ST First Drive Review: A Killer With A Conscience?
Amoral beast that it may be, the Edge ST is sympathetic to performance lovers who need utility. 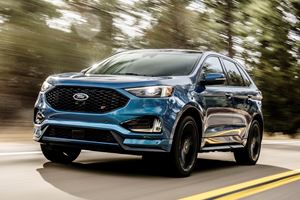