Ford Officially Confirms A Bunch Of New Vehicles For 2019

Now that most of the shock has worn off after Ford announced earlier this year plans to eliminate its entire car lineup in the US, save for the Mustang, it's time to move on to see what'll happen next. Obviously, we're sad to see some of those vehicles go, specifically the Fiesta ST, and Focus ST and RS, but the automaker isn't wasting any time with new rollouts.

We previously reported the Mustang Shelby GT500 and the 2020 Explorer will debut in a couple of weeks at Detroit, but Ford North American product communications chief Mike Levin has confirmed on Twitter more new models we'll see in 2019. "So many new Ford vehicles coming in 2019, including Explorer, Escape, Mustang GT500, F-Series Super Duty and Transit," Levine wrote.

At the moment, no details have been released about the 2020 Escape, F-Series Super Duty, or the Transit, but that will change soon. The Ford Escape crossover is actually due for a redesign, as the current generation went on sale back in 2013. It's built on the same front-wheel-drive platform as the outgoing Focus, so it's fair to assume its successor will ride on the same platform as the new and overseas-only Focus.

We also recently learned that the reborn Bronco will only be unveiled following an F-Series refresh, meaning the former may not appear until next year as a 2021 model. Levine also did not make any mention of the so-called 'baby Bronco,' another Focus-based crossover with similar styling to that of its big brother.

The F-Series update apparently takes precedence over both Broncos for one reason: it's Ford's best-selling vehicle, most notably the F-150. Both GM and Ram have launched all-new full-size trucks, the Chevrolet Silverado/GMC Sierra and Ram 1500, respectively, and both are more competitive than ever against the Blue Oval's pride and joy. Based on Levin's statement, we'll likely be seeing an updated F-Series Super Duty before the F-150 arrives.

Ford will be hosting a pre-show debut of its all-new Explorer later next week and we'll be on hand to bring you full details. We also hope to learn more regarding these 2019 reveals, so stay tuned. 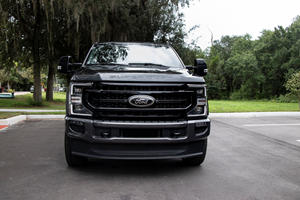