The Blue Oval has released a series of videos showing just how flexible a front trunk is.

One of the many benefits of electric vehicles (well, some of them) is increased practicality in the form of a front trunk, or frunk as they're more commonly known. With the arrival of mainstream EVs comes a change in vehicle ownership. Gas stations are swapped out for charging stations, engine noise makes way for the silent whirr of an electric motor, and hefty repair bills are supplanted by fuss-free maintenance.

But Ford wants you to even rethink how you use your EV. In a series of videos posted to the Blue Oval's YouTube channel, a trio of creative professionals are challenged to carry out several tasks using nothing but the frunk of the Ford F-150 Lightning and Mustang Mach-E. In the first installment of the series, culinary influencers Pierre Serrao and Jon Gray demonstrate the sheer usability of the F-150 Lightning's Mega Power Frunk.

With no need for a large ICE-powered engine, the massive frunk easily swallows all the necessary utensils and equipment needed to whip up a meal - and even provided the power needed to prepare the food. Admittedly, the sub-three-minute video is devoid of any technical information but does highlight just how useful the frunk is in a youthful and engaging manner. This is clearly what Ford is aiming for - younger consumers are more open to purchasing EVs.

Tania Taiwo - a writer for the ad agency which handled the campaign - said the left-field marketing also centered around getting the term "frunk" into the public's vocabulary. "How can we get this term into the lexicon, where it's in pop culture and it's not in a cheesy way," she said. 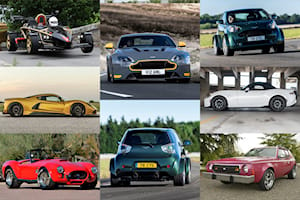 Other videos highlight the versatility of the frunk by showcasing its practicality in unexpected ways. In the second installment of the series, the Mustang Mach-E and F-150 Lightning provide power to a pair of musicians and, in another, a tattoo artist exhibits her talents by intricately tattooing a car seat, again by way of the practical F-150.

The Dearborn-based brand isn't the only company set on revolutionizing vehicle practicality in the EV era.

Rival GM will debut what it calls the eTrunk, a lockable, weatherproof space that may not be as big as the F-150 Lightning's frunk, but is nearly as practical, thanks to myriad accessories such as dividers.

The concept isn't new, with brands like Tesla having offered it for some time, but Ford is trying to take the feature mainstream.