Ford's Airbag Recall Gets Much, Much Worse

And a separate recall adds salt to the wound.

The Takata airbag recall saga continues to drag on, with Ford the latest carmaker to be caught up in it. Ford has already paid out nearly $300 million in Takata-related fines and informed owners of certain Ranger models to stop driving their trucks.

If that wasn't bad enough, Ford has recalled just under one million additional vehicles for the Takata airbag inflator issue, marking the fourth time the company has issued such a recall. The recall expansion covers 953,000 vehicles, around 780,000 of which are located in the US.

When Ford receives these vehicles, it will replace the faulty part with a working one. Ford hasn't issued a schedule for the recall but you should expect to receive a notice in the mail if you own one of these models.

In addition to the airbag recall, Ford is also recalling 87 examples of the 2019 EcoSport, 63 of which are located in the US. This recall is minuscule by comparison and addresses an insufficient weld on the back of the front seat. The weld could cause the seat to collapse, increasing the risk of a crash. Ford will simply replace the faulty seats with brand new ones. If you've happened to stain your front seat by accident, this particular recall could be a welcome one. 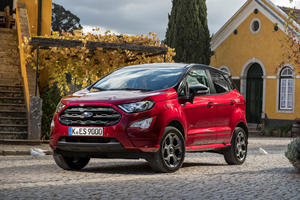