Ford's New Bronco Has Been Showing Off In Jeep Territory

This time, the rugged off-roader was spotted on the famous Rubicon Trail.

Building a Ford Bronco without serious off-roading acumen would be sort of like making a Ford GT that couldn't handle itself around a racetrack: a misapplication of the nameplate and its heritage. Ford knows this, and from what we've seen so far of the 2021 Ford Bronco, it's absolutely up to the challenge of filling the shoes worn by its forebears.

Determined to ensure that's the case when the Ford Ranger-based off-road SUV finally launches next year, Ford engineers have been spotted on a couple of different occasions subjecting the new Bronco to some challenging off-road terrain. The latest of these occurs right in the heart of Jeep Wrangler territory as the Bronco has been recorded tackling the infamous Rubicon Trail.

The Rubicon Trail is a 22-mile route in the Sierra Nevada in California with some particularly grueling off-road sections, which Jeep often turns to for testing the off-roading capabilities of its own vehicles - hence the "Rubicon" trim level offered on Wrangler and Gladiator. With the new Bronco, Ford is especially keen on moving in on the Wrangler's corner of the SUV market, making the Rubicon Trail the perfect place to test its mettle.

The video clip above, originally uploaded to the forums at Bronco6G, shows a 2021 Ford Bronco Badlands with the optional Sasquatch package looking quite at home on the rocks, even if it is ultimately unsuccessful at making this ascent. The cars took quite a beating, too, as photos published by a Facebook user show damage to the bashplates and bodywork of the fleet of Broncos.

That failure might not be the Bronco's fault, as ultimately, it was let down by a lack of traction. The team might have had more success with a set of aggressive mud-terrain tires, or if they'd at least aired down the Sasquatch's 35-inch Goodyear Territory shoes more. The Bronco certainly appears to have enough suspension articulation for the job, and we know it has the drivetrain for it.

But rather than point fingers, we're just going to take a moment to reflect and be grateful that Ford cares enough about the Bronco's off-road performance to conduct tests like this. In a world increasingly dominated by uninspired crossovers, vehicles like the Bronco are a rare breed. 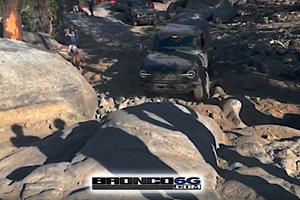 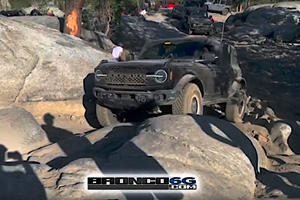 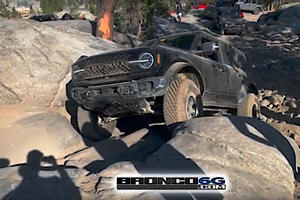 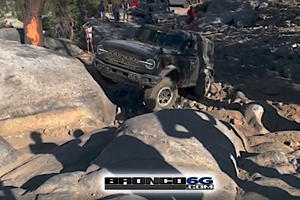 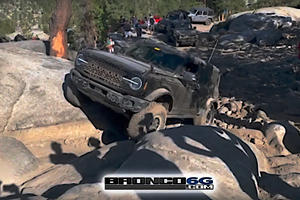