Cheap, affordable sports cars are starting to become a forgotten heirloom of the past. Cars like the Nissan 240SX, Acura RSX, and Toyota MR2 have all gone and we are left with really only two choices, the 86 twins and the Mazda MX-5. The MX-5 costs around $25,000 and the Toyota 86 is about $1,000 more than that, but both cars get the same flack from so-called enthusiasts, "they don't have enough power." 155 hp in the Mazda and 205 hp in the Toyota don't sound like big numbers, but how much more should be expected from a mid-$20,000 car?

$20,000 doesn't really buy much on the new car market anymore. Even the most basic Honda Civic will run about $19,000. However, the used market is full of great fun cars that cost less than $20,000, including possibly the greatest car that Honda has ever built. Before anyone chimes in that the NSX was the greatest car Honda ever built, we would like to remind everyone how bad sales were when the NSX was new and barely updated through its long life. The car we have in mind was much more relevant and is much more affordable today. We are of course referring to the venerable Honda S2000. Even though the S2000 came out in 1999, it still has around 40 more hp than a brand new Toyota 86.

We won't make fun of Toyota too much, because the S2000 was much more expensive when it was new than the 86. In fact, the base MSRP for an S2000 in its final production year in 2009 was just under $35,000. We wouldn't have called the S2000 a "cheap" sports car when it was new, but just 8 years after the S2000 left production, it is now remarkably affordable. There are some pricey models of the S2000 like the rare CR version or pristine examples with less than 10,000 miles that will run over $30,000. However, these are only for the type of people who really want to collect the car. The market is littered with tons of affordable options for less than $20,000 with very low mileage.

We ran a basic search for S2000 models under $20,000 and it returned lots of AP1 and AP2 models, some even had less than 30,000 miles on them. For those who don't consider themselves S2000 experts, we will take a moment to explain what AP1 and AP2 are. The AP1 was the first generation of the S2000 from 2000 to 2003 in the US. These models had a 2.0-liter four-cylinder engine with 237 hp and 153 lb-ft of torque. The AP2 had a larger 2.2-liter displacement with some cosmetic changes on the outside. The AP2 also ditched the AP1's insane 9,000 rpm redline in favor of a lower 8,200 in order to broaden the torque curve. This made it feel faster during every day driving, which doesn't require hitting redline all the time.

Shopping for the right S2000 is easier than other sports cars like the BMW M3, because there is no need to weed out automatic models. The S2000 was only offered with a six-speed manual, which makes shopping for one much less of a minefield of mislabeled SMG cars. The only big decision is whether to get the rev-happy AP1 or the more practical and slightly updated AP2. Either way, the S2000 is one of the greatest driving experiences that money can buy. Few cars on the road rev higher, and few offer as much driving feel. If the Subaru BRZ, Toyota 86 and Mazda MX-5 aren't powerful enough, then why not consider the S2000? It doesn't offer Corvette-levels of power, but that's not the point.

S2000 values have held steady and have even risen in certain cases. We don't recommend buying one just as an investment, because that would require leaving it covered up in a garage. These cars need to be driven! However, we can say that the S2000 is a safe purchase because it won't lose much of its current value. Honda may soon revive the S2000 and Toyota's long awaited Supra replacement is also on the way, but those cars could easily break the $50,000 to $60,000 barrier, and why pay that much when the S2000 is still out there? The S2000 packs around the same power as the $55,000 Alfa Romeo 4C, just think about that the next time anyone says that there aren't any affordable fun cars. 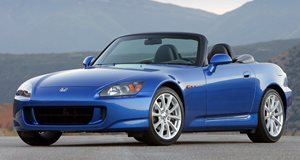