Genesis GV70 Fuel Economy Is Worse Than We Expected

Despite being smaller and lighter than the GV80, the GV70's fuel economy still disappoints.

Better late than never, Genesis made its first foray into the lucrative SUV segment with the launch of the luxurious GV80. Slotting below the GV80 is the sportier GV70, which is effectively the Korean automaker's answer to the BMW X3, Mercedes GLC, and Audi Q5. Under the hood, the GV70 is offered with either a 2.5-liter turbocharged four-cylinder engine producing 304 horsepower or a more potent 3.5-liter twin-turbo V6 rated at 380 hp.

Both engines are paired with an eight-speed automatic transmission. We still don't know how much the GV70 will cost or when it will launch in America, but the EPA has already released fuel economy figures for the V6 variant.

Unfortunately, if you were hoping the GV70 will be significantly more frugal than its larger GV80 sibling, prepare to be disappointed. When equipped with the 3.5-liter twin-turbo V6 and all-wheel-drive, the Genesis GV70 is rated at 19/25/21 mpg city/highway/combined.

For comparison, the V6-powered GV80 is rated at 18/23/20 mpg, so the GV70 is only slightly more efficient despite being smaller and lighter. Fuel economy figures haven't been released for the 2.5-liter four-cylinder version yet, but the entry-level GV80 is rated at 21/25/23 mpg city/highway/combined with rear-wheel drive and 21/25/22 mpg with all-wheel drive.

Based on these figures and the EPA's estimates for the V6 model, the 2.5-liter GV70 will likely achieve 24 mpg combined with RWD and 23 mpg combined with AWD. This still falls short of the competition, however.

The most frugal BMW X3 is rated at 27 MPG combined, while the Mercedes GLC and Audi Q5 are rated at 25 MPG combined. To be fair, the GV70 is more powerful than its competitors, so this isn't surprising. However, the more powerful M40i, which has a 3.0-liter turbocharged inline-six engine producing 382 hp, has roughly the same power output as the V6-powered GV70, yet still provides better economy with an EPA rating of 23 mpg combined. 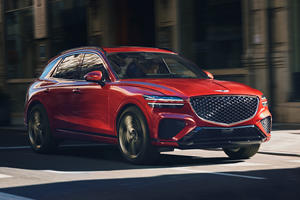