Genesis can only survive for so long selling sedans.

Since launching as a standalone luxury brand, Genesis has yet to make much of an impact on the sales charts. The recently unveiled G70 will become the most affordable car in the Genesis lineup, but it will need to be a strong seller because the brand's current sales figures aren't very encouraging. According to Carsalesbase, Genesis sold 20,612 vehicles in the US last year and has only sold 8,490 units so far this year up until August. These dismal sales figures are perhaps not surprising when you consider Genesis is undergoing a radical transformation of its dealer network.

To help boost sales and keep the brand alive, Genesis is planning to launch a series of crossovers within the next few years. The first will arrive in early 2020 and, according to Car and Driver, it will be a production version of the gorgeous GV80 concept that made its surprise debut at the 2017 New York Auto Show. The styling of the production GV80 is expected to closely resemble the concept.

According to the publication, the mid-size GV80 will go on sale around the same time as the next-generation G80 sedan and be built on the same platform. Both models are expected to be offered with the same 3.8-liter V6, twin-turbo 3.3-liter V6, and 5.0-liter V8 engine options as the current G80.

The following year, the luxury automaker is expected to unveil an entry-level GV70 crossover loosely based on the G70 sedan to compete with the likes of the Audi Q5, BMW X3, and Mercedes GLC. Don't expect it to use the same engines as the G70 however, because Genesis Motor America executive director Erwin Raphael thinks the crossover's launch "could be a great time to introduce other powertrains." Hopefully entering the lucrative luxury SUV market will help give Genesis the success it deserves. 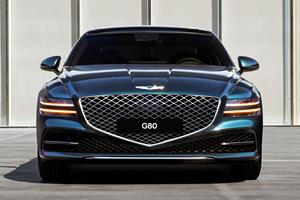