Over the last few years, automakers have been electrifying their lineups at vastly different rates. On one side of the spectrum, there's Mazda. The Japanese marque only has one EV in its lineup, the MX-30, and it'll only be sold in California when it arrives in October. The likes of Buick and Dodge have no EVs at all. But over at Kia, no less than nine new EVs were teased in January, and the new Kia EV6 will soon join the Niro EV.

Like Kia, Genesis wants to accelerate its rate of electrification as quickly as it can. Hyundai's luxury marque just announced that from 2025, all its new models will either be fully electric or driven by a hydrogen fuel-cell powertrain. It also teased eight new EVs in a live video shared this week.

Genesis recently took the covers off its first EV, the GV60. The reception to the GV60's styling has been quite frosty but it remains a landmark vehicle for the brand and it's said to have the ability to recharge its batteries wirelessly. But the GV60 is just the beginning. By 2030, all Genesis models will be electric and the company aims to sell 400,000 EVs annually. The eight EVs said to arrive by 2030 all have the distinctive lighting signature from the stunning X Concept. As teasers go, it's hard to clearly see all the body styles on display but we can just about pick out what looks like a two-door coupe and several crossovers.

The crossovers, pictured on the right of the teaser image, seem to get progressively larger in size. They retain a coupe-like roofline. In the video, Genesis made special mention of the gorgeous interiors of some of its future cars that will make ingress and egress easy thanks to the absence of B-pillar, rear-hinged rear doors, and swivel seats. Soothing mood lighting will also contribute to a serene, luxurious driving experience. The Genesis eG80 is already on the way as an answer to the Tesla Model S. With a brace of new EVs to arrive within the next decade, Genesis is wasting no time stepping into the future. 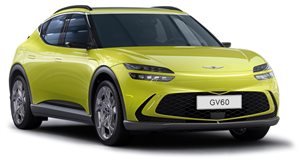